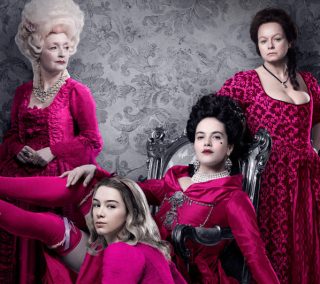 Kate Fleetwood is playing Nancy Birch in the new drama series ‘Harlots’. The cast also includes Samantha Morton and Lesley Manville. The drama is airing on ITV Encore, the network’s channel dedicated to drama. The eight-part drama continues on May 1 at 10pm with episode five. It will then be available to watch on ITV Encore + 1 at 11pm. The show is also available on US subscription video on demand service Hulu.

Harlots is set in London in the the year 1763 where one in five women are selling their bodies. With brothels on every corner, the drama focuses on one madam, Margaret Wells and her daughter Charlotte who become embroiled in a turf war with rival madam Lydia Quigley. The eight-part series will be told from a “whore’s eye view” and will feature a modern soundtrack as well as scenes of sex and violence. It was inspired by a book called Harris’s List of Convent Garden Ladies, a Yellow Pages-style directory that featured a list of prostitutes, their ages, price and sexual perversions. And unusually for a drama series, the entire team of directors, writers and executive producers are women.

For more information about Kate Fleetwood or to book Kate for a voiceover please call Emma on 0207 9524361 or email: info@harveyvoices.co.uk