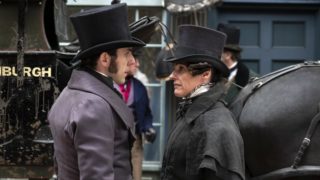 Gentleman Jack, a period drama set in 19th-century Halifix in West Yorkshire, England, tells the story of Anne Lister, a well-off Yorkshire landowner famous for her four-million-word diary that documented her lesbian relationships, travels and efforts to transform the fate of her faded ancestral home Shibden Hall.

Michael is known for his performances in “Never Let Go”, the quirky comedy “Gnomeland” and appearing with the Muppets in “Muppets: Most Wanted”. He has played leads in over twenty West End musicals, receiving two Olivier Award nominations for roles as The Wolf/ Cinderella’s Prince in “Into the Woods” and Oliver in “Love Story”, and winning a Broadway World Award for his performance as Joe Gillis in “Sunset Boulevard” opposite Glenn Close in London and on Broadway.

For more information or to book Michael please email: info@harveyvoices.co.uk