The eight-episode series is a neo-noir fantasy that follows mythical creatures who have fled their war-torn homeland and gathered in the city as tensions are simmering between citizens and the growing immigrant population. At the center of the drama is the investigation into a string of unsolved murders, madness of power, unresolved love, and social adjustments eating away at whatever uneasy peace that exists.

Carnival Row stars an illustrious cast lead by Cara Delevingne and Orlando Bloom. The series premiered on August 30, 2019 on Amazon Prime. A second season has been confirmed, without a release date having been mentioned though.

Ronan is a fantastic actor known for his performances in Saving Mr Banks alongside Tom Hanks and Emma Thompson, Penny Dreadful, The Borgias and the epic mini series Hatfields & McCoys in which he starred alongside Kevin Costner, Tom Berenger and Bill Paxton. Other films include Dracula Untold, Shadow of a Vampire with John Malkovich, Tomb Raider II, Shanghai, The Pianist and many more. His voice credits include Assassins Creed IV: Black Flag and Heretics video games. 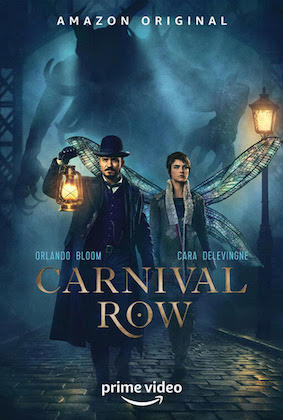