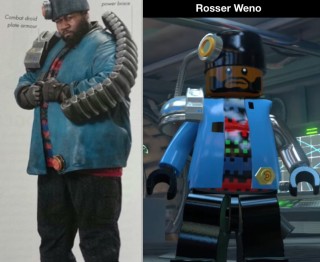 Its not everyday you wake up to find you’ve been made into LEGO! Elroy ‘Spoonface’ Powell played character Rosser Weno in ‘Star Wars VII The Force Awakens’ and has now been imortalized as a LEGO character. Rosser Weno was an individual seen at Maz Kanata’s castle on Takodana around the time the First Order attacked the castle when searching for the Resistance droid BB-8.
LEGO Star Wars: The Force Awakens is a video game consisting of twelve levels based on Star Wars: Episode VII The Force Awakens, and six “bridge content” levels based between Episodes VI and VII.
The latest LEGO Star Wars: The Force Awakens Level Pack is now available in the First Order Siege of Takodana Level Pack experience the attack on Maz Kanata’s castle from the perspective of the First Order, as Kylo Ren tracks down Rey and BB-8, to find the missing piece of the map to locate Luke Skywalker and crush the Resistance forever.

Elroy ‘Spoonface’ Powell was the voice behind club anthem ’Hey Girl’ had his first taste of international recording success as part of dance group ‘Black Legend’. Their reworking of the Barry White classic “You See the Trouble with Me” reached No. 1 in the UK and sold over a million copies worldwide. He’s a regular face in ‘Eastenders’ and recently he provided the vocals for the recent ‘Switch Guarentee’ TV campaign. For more information or to book Spoonface for a voiceover call Emma on 0207 9524361 or email: info@harveyvoices.co.uk