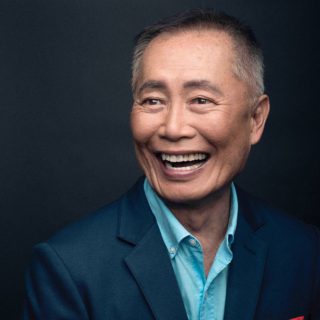 Bio : George is best known as Sulu in the original "Star Trek" TV series & first 6 feature films. Most recently he has voiced Panda Elder in the BBC's new animation series 'Love Monster'. He played Kaito Nakamura in hit series "Heroes" and starred alongside Tom Hanks and Julia Roberts in "Larry Crowne". A social justice activist, social media superstar, Grammy-nominated recording artist, New York Times bestselling author, and pioneering actor whose career has spanned six decades. He has appeared in more than 40 feature films and hundreds of television roles and he has used his success as a platform to fight for social justice, LGBTQ+ rights, and marriage equality. His advocacy is personal: during World War II, Takei spent his childhood in United States internment camps along with 120,000 other Japanese Americans. He now serves as Chairman Emeritus and a member of the Japanese American National Museum’s Board of Trustees, and a member of the US-Japan Bridging Foundation Board of Directors. Takei served on the board of the Japan-United States Friendship Commission under President Bill Clinton, and, in 2004, was conferred with the Gold Rays with Rosette of the Order of the Rising Sun by the Emperor of Japan for his contribution to US-Japan relations.

Description : He has a gloriously deep, velvety, resonant timbre which is instantly recognisable!