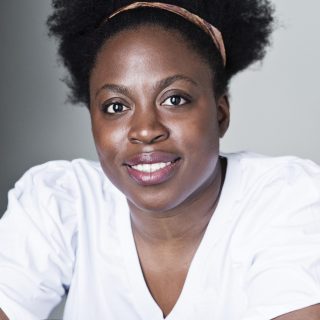 Bio : Layo-Christina is one of Digital Spy's 30 Black-British Rising Stars of Tomorrow 2020. She is an actress and writer and part of the BFI NETWORK BAFTA Crew 2021. Layo-Christina is a native Londoner of Nigerian descent and speaks fluent Yoruba. Her screen credits include, for TV- ‘I May Destroy You’ (BBC/HBO), ‘Danny Boy’ (BBC), ‘The End Of The F**cking World’ (Channel 4), ‘Temple’ (Sky) and for Film; ‘Rocks’ (Fable Pictures/Netflix), ‘The Last Tree’ (Prodigal Film/Netflix). She has performed in plays for the National Theatre, Shakespeare’s Globe, Arcola, Park Theatre and The Bush. Layo-Christina has voiced projects for Shell, BBC’s Africa Turns The Page/The African Novel, the BBC 1 drama 'Our Girl' and most recently four episodes as Kemi in the new BBC Radio 4 audio drama 'Siege'.

Description : Fresh, natural, articulate with a warm and assuring, conversational tone. A great accent range from anything London to various American, Caribbean and West African, also Yoruba fluent. Layo-Christina can voice her native London, with a twist of her Nigerian descent!