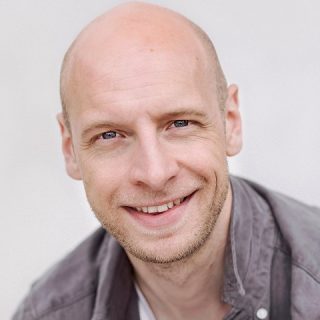 Bio : Mark is an award winning actor and writer, based in London. He is known for starring in 'Sitting', Katherine Parkinson’s acclaimed BBC three-hander comedy drama. He has recently completed a Lead Mo-Cap Role on an upcoming Marvel Studios Feature Film (current NDA). His screen credits include; ‘I May Destroy You’ (BBC/HBO), ‘AfterLife’ (Netflix), ‘The Salisbury Poisonings’ (BBC), ‘The One’ (Netflix), ‘Roadkill’ (BBC) ‘Chernobyl’ (SKY/HBO) and ‘The GameChangers’, the BBC Feature Film in which he starred opposite Daniel Radcliffe. Mark is an experienced stage actor, having performed at many leading UK theatres. Recent productions include; 'Sitting' (Arcola Theatre), 'Primetime' (Royal Court) and 'So Here We Are' (Royal Exchange) and 'Captain Amazing’, a one man show which required 24 different voices (Soho Theatre). He has featured in a Wickes radio campaign and various commercials, most notably as the comedy hero in the longstanding Carling Lager TV advert. Mark graduated from Manchester University with a BA Hons in Drama. He is Founding Director of ‘The Ten’ mentorship programme and a published writer for stage and screen.

Description : Mark’s voice is expressive, characterful and engaging with a naturally warm and friendly tone. A versatile actor with strong improvisation and comedy and skills, Mark will bring a playful charm and kudos to any voiceover.