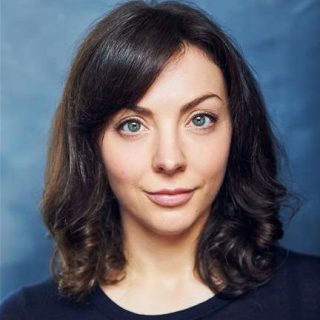 Bio : Naomi Sheldon trained at LAMDA where she won a Carlton Hobb’s radio 4 award. Upon graduating she starred along side Russell Tovey and Jaime Winstone in the West End run of 'Sex With A Stranger'. She is most well-known for her multi-award winning comic play 'Good Girl' which transferred to the West End and is currently in development for a TV series. 'Good Girl' won Voice's pick of the Fringe award 2017 "phenomenal acting" (Steve Bennet). She played the lead role of Aliena in 'The Pillars of The Earth' video game and a player in 'Next Gen'. Her commercials include: 'Trident', 'AA car genie', 'Vodafone', 'Maltesers', 'Media World', 'Franziskaner'. Naomi trained with the Free Association, and is a regular improvisor.

Description : Naomi has a naturally clear, crisp and bright neutral voice while retaining warm and friendly tones. Her comedy and improv background make her ideal for exciting character voiceovers especially for animation and video games. So whether you want RP or regional accents Naomi has it covered.